Background on the Safe Sleep Issue

Georgia has one of the highest infant mortality rates in the country, averaging three infant deaths per week due to sleep-related causes. SIDS (Sudden Infant Death Syndrome) was the third leading cause of fatality to children in Douglas County between 2009 and 2015, and suffocation was the fifth leading cause for children 0-19 in the same time period (Georgia Department of Public Health Online Analytical Statistical Information System [OASIS] database). In a seven-month time span between July 2015 and January 2016, Douglas County suffered five sleep-related infant deaths (Douglas County Child Fatality Review Board).

In October 2016, the American Academy of Pediatrics expanded its safe infant sleep recommendations to reinforce sleep position (back versus stomach) and proper sleep environment. As the illustration below shows, infants placed on their back will have a lowered risk of choking due to the position of the airway/trachea and gravity (i.e., when placed on their back, an infant’s stomach contents that may come up into the throat/esophagus during sleep will more likely go back to the stomach instead of into the lungs). 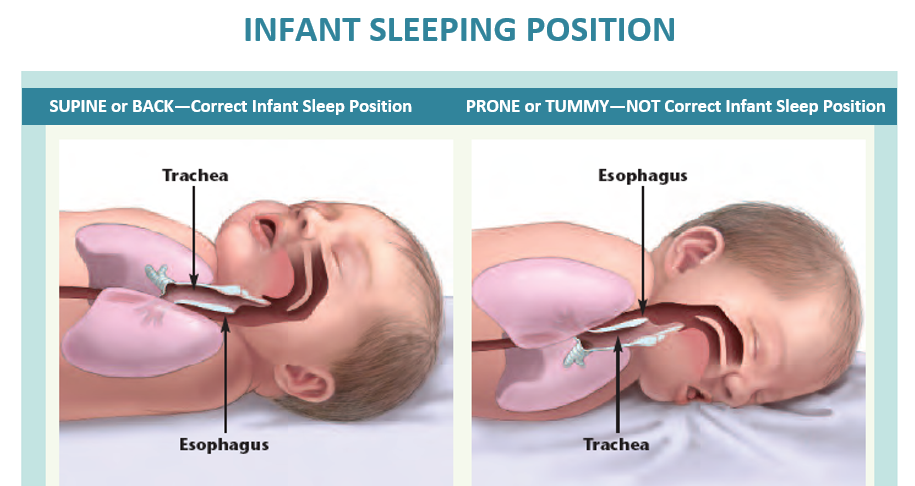 In addition to sleep position, it is critical that we educate parents about the baby’s sleep environment. We are cautioning against co-sleeping arrangements with parents or other siblings in the same bed as the infant. There are also significant concerns with putting infants in beds with lots of loose bedding, stuffed animals or excess clothing. All of the above can potentially result in severe injury or death. 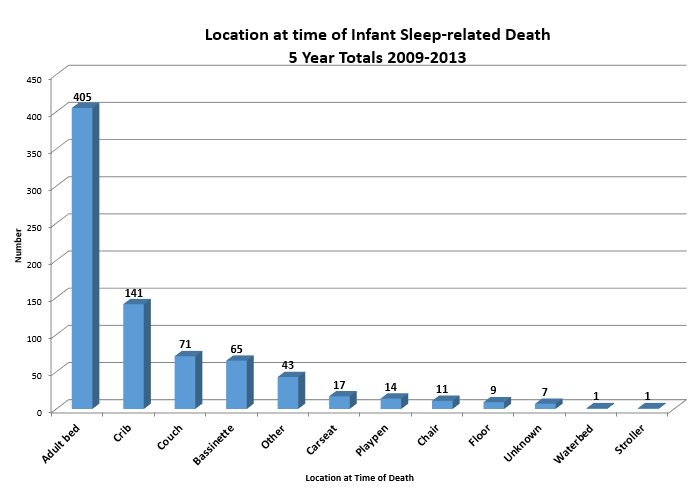 The Georgia Department of Public Health (GA DPH) launched a limited Safe Sleep initiative in 2016 to help prevent sleep-related deaths and to educate parents about creating a safe sleep environment for their children. GA DPH is providing the design of various public health messages, newborn travel bassinets for bedside sleeping near parent in the first few weeks of life and educational board books to reinforce the messaging while also encouraging reading to the infants. Area hospitals are investing staff time to distribute the initial information. The Douglas County Safe Sleep initiative will expand on this statewide campaign to reach ALL new parents and caregivers in Douglas County with additional accurate, consistent, and tailored messages.

The Douglas County Safe Sleep initiative’s goal is to saturate the county’s population of 140,773 people with educational Safe Sleep messaging during 2017.

During this Safe Sleep initiative in Douglas County, we will track the number of advertisements, educational materials, and safety supplies distributed and the number of education sessions provided. We will also measure effectiveness of education and supply distribution efforts through pre- and post-intervention surveys. The outcome sought is a reduction in sleep-related infant deaths in Douglas County post interventions as monitored and investigated by the local Child Fatality Review Committee. Use our contact form to reach out to DHFF team. We’re always interested in hearing from the community we serve.